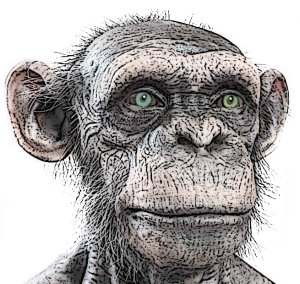 I am known as Mondo Monkey. I travel through time... It is a bad habit I picked up on my journey, and it is something that I will never give up. I like it here in the early 21st century. I come back often. Words still seem useful, and humans are still around...

I've always liked humans, mostly because I see myself in them, and they know how to laugh, and laughter is very useful for travelers. Hell, they are a real fine bunch. I'll always support'em, even after they become obsolete. Someone's gotta, and I am that someone. I have a lot that I want to say about them and their condition, but that will come later.

This web page is where you will hear the stories that I have accumulated over the past several thousand years (I think it is close to six thousand, but as you will learn later, it is all relative). Luckily, I have only aged about 9 weeks since my 33 birthday, and that was over 5000 years ago! However, I do feel very old and at times take breaks from my happy-go-lucky tours through time. Experience can be a burden, the Buddhists got that right.

There are many things that are different for us time travelers. It's not for everyone, even if you are given a choice. Recently, I've heard rumors that a large number of the original travelers have grown so tired of traveling, they have stopped altogether and purposely lost their memories. I can understand.

My situation is a bit different: I took a vow. Yep, I promised to never stop traveling no matter what happens to me. I did one of those "I'll-keep-traveling-until-every-known-sentient-being-has-come-to-know-about-traveling" things. Hey, it was the only way I could get access. I used to believe that it was an achievable goal, but have come to learn that it is really not possible, and I am ok with that now. It took a while to get used to though.

I will write more as time permits. I have much to tell and way too much time to tell it.

Comments:
Someone has sugested that the Mondomonkey graphic would be a great album cover.

But I am leary of using it without permission, Can I ?

If you get a chance please check out our promo trailer for our documentary, MY RUN. It’s based on the true story of widower TERRY HITCHCOCK, an everyday man who ran the equivalent of 75 consecutive daily marathons - over 2,000 miles - to bring awareness of the hardships faced by single parent families.
http://www.youtube.com/watch?v=99jtkDWZ8E0

So how is the time traveling?